Two Parts of Your Site That Are Losing You Customers

Have you ever gone to a site only to leave moments later because it was taking too long to load or you could barely read it on your smartphone? We’ve all done it and every time we do whatever business owns that site has effectively lost a customer. Not only have they lost you as a customer but every time someone leaves a site before it’s loaded (known as a bounce) it hurts that site’s ranking with Google. A high enough bounce rate coupled with a slow site that doesn’t work well on mobile and you could lose that coveted spot on the front page when people are looking for your services. That means lost business. Here’s a look at how both speed and mobile responsiveness can cost you customers:

This means you could be losing half of your customers before they even see your site. It’s like putting up a ‘Closed’ sign and boarding up the windows for half the day and encouraging them to go to your open all day competitor next door.

There are a lot of things that contribute to the speed of your site. The biggest slow downs typically come from a poor hosting environment (the server that delivers your content), the quality of the code, the size of images you’re using, and how well optimized your design is for the web. Fine tuning all of these elements can lead to massive speed increases and help you get ahead of the competition online. 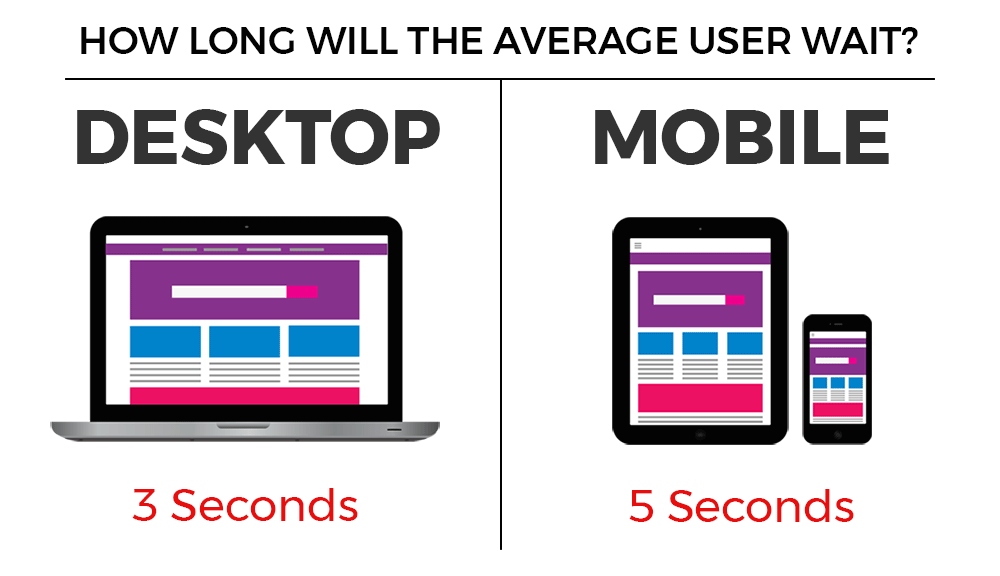 More and more users are ditching their desktop computers and even their laptops in favor of browsing the web on their phone. In fact, in 2016 mobile and tablet usage surpassed desktop usage for the first time and these numbers are only going to skew farther and farther in favor of smartphones as time goes on. With more people looking for services on their phone it’s important to serve up a version of your site that they can read on their mobile device as easily as they could on their desktop. This is called responsive design and a Google survey found that 74% of visitors were more likely to return to mobile friendly sites and 61% were likely to leave a site if it wasn’t. The part that’s most interesting for your bottom line is that 67% were more likely to buy from a website that worked on their mobile phone.

Ensuring that your content works across every device that your customers use is vital to keeping their attention and making sure that your business isn’t being passed over in favor of a competitor because it’s easier to read their content on a smartphone.

Running a business is hard and getting new customers is challenging enough so you should at the very least not turn people away at the door with a slow site that people can’t view on their phones. Research shows that 88% of users are less likely to return to a site after a bad experience and that’s if they stick around for it to load at all. Find out if your site meets your customer’s needs and if it doesn’t then you might already be losing customers to a competitor that does.

Stop Losing Customers Because of Your Slow Site

We have slashed load times for our clients while providing beautiful and feature full designs that help them get more customers. Take a look at these stats from our last project:

Get a FREE Site Analysis and Improvement Guide

Interested in having us develop your web presence or improve your marketing? Give us a call at 941-677-2427.